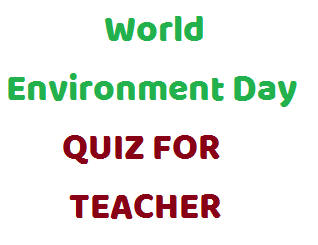 World Environment Day (WED) is celebrated on 5 June every year, and is the United Nations' principal vehicle for encouraging awareness and action for the protection of our environment. First held in 1974, it has been a flagship campaign for raising awareness on emerging from environmental issues to marine pollution, human overpopulation, and global warming, to sustainable consumption and wildlife crime. World Environment Day has grown to become a global platform for public outreach, with participation from over 143 countries annually. Each year, WED has provided a new theme that major corporations, NGOs, communities, governments and all celebrities worldwide adopt to advocate environmental causes.

World Environment Day was established in 1972 by the United Nations on the first day of the Stockholm Conference on the Human Environment, resulting from discussions on the integration of human interactions and the environment. Two years later, in 1974 the first WED was held with the theme "Only One Earth". Even though WED celebration have been held annually since 1974, in 1987 the idea for rotating the centre of these activities through selecting different host countries bega.

he theme for 2020 is "Time for Nature", and will be hosted in Colombia in partnership with Germany.

Colombia is one of the largest “Megadiverse” nations in the world to hold 10% of the planet’s biodiversity. Since it is part of the Amazon rain forest, Colombia ranks first in bird and orchid species diversity and second in plants, butterflies, freshwater fish, and amphibians.


The Slogan of the 2015 edition of the World Environment Day is "Seven Billion Dreams. One Planet. Consume with Care". The slogan was picked through a voting process on social media. In Saudi Arabia, 15 women recycled 2000 plastic bags to crochet a mural in support of the WED 2015. In India, Narendra Modi planted a Kadamb sapling to celebrate the World Environment Day and raise awareness for Environment Italy is the host country of the 43rd edition of the WED. The celebrations took place as part of Milan Expo around the theme: Feeding the Planet - Energy for Life.