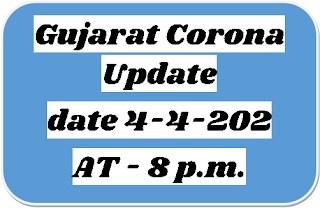 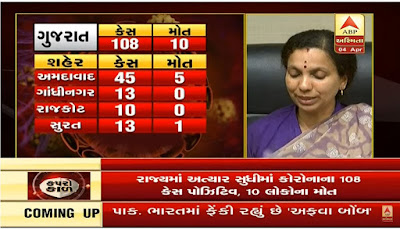 The corona of Koruna remains unchanged in Gujarat. 44 cases in the first 8 days and 48 positive cases in the second 8 days. Giving details of Corona's update, Health Principal Secretary Jayanti Ravi said that 12 new positive cases have been registered in the state today. Two cases have been registered in Gandhinagar, two Bhavnagar, one Patan, one Surat and six cases in Ahmedabad. All these cases are mostly local transmission. With this, there have been a total of 107 positive cases in the state. Four positive patients have been discharged as they recover. An 80-year-old woman is also in Gandhinagar. Who won the war against Corona. One person has died today from Corona. With this, the total number of dead bodies has reached 10 A. The ICU ward was also visited and corona treatment has been reviewed.

Seven people from Gujarat have been identified in the Nizamuddin Talegh Jamaat-e-Markaz. Up to 103 people were identified till yesterday. One has died while one has undergone a coron-positive test. A total of 110 people have been identified with the seven new people who have been involved in the phase-out. Seven new people are Navasari, state police chief Shivananda Jha said. He further said that action has been taken against those who have returned to Gujarat from Nizamuddin phase after lockdown. Four offenses have been registered against 10 such persons. Of which 2 have been registered in Botad and 1-1 in Navsari-Bhavnagar. 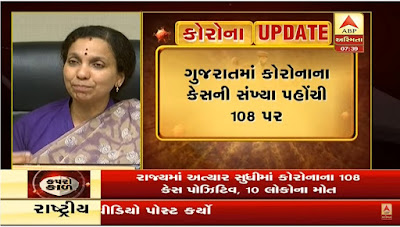 In the third stage of Ahmedabad Corona

Ahmedabad has the highest number of Corona positive cases in the state. Ahmedabad has reached the third stage of Corona. Then many areas of the city are being quarantined in cluster. As well as many people still breaking the law, strict action is being taken against them.