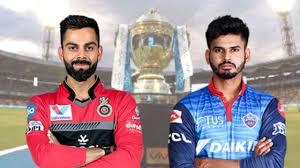 • Game Desk In the 46th match of IPL, Delhi Capitals decided to bat on winning the toss against the Royal Challengers Bangalore on the Ferozeshah Kotla ground. Delhi's Shikhar Dhawan and Captain Shreyas Iyer are on the crease. Prithvi Shaw was dismissed by Umesh Yadav for 18 runs. His catch was wicketkeeper Parthiv Patel.
• Earlier Delhi replaced Chris Morris while making a change in the team